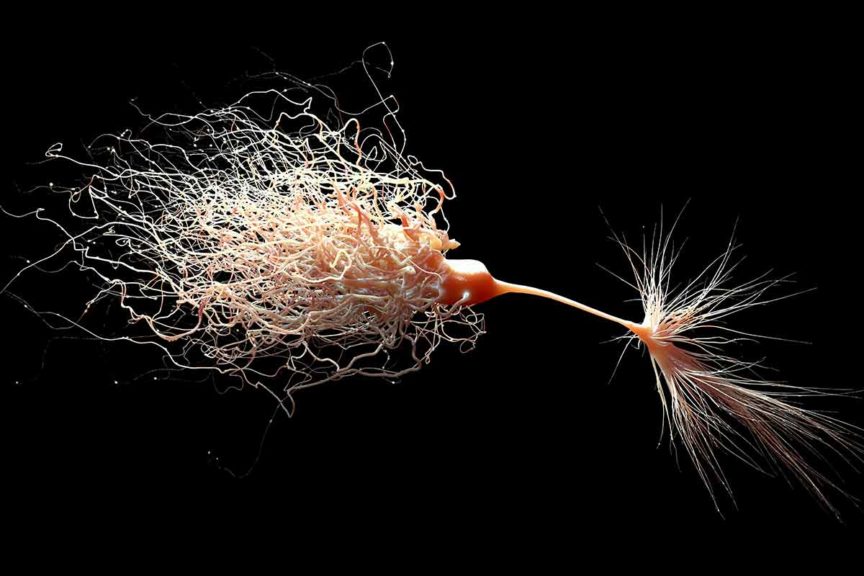 This is the first in a series exploring Sleep Science. It is an exploration into the hormonal implications of sleep, but it also functions as a lay-person’s introduction to neuroscience.

The first step in examining some of the physiological evidence to supplement the behavioral science we conduct every day is to review the behavior of the synapse, where one neuron meets another. But what’s a neuron? 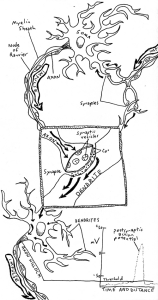 The innumerable connections between axons and dendrites form the complex network of pathways that shapes an individual, and a look at the basic function of this connection will precede the discussion of how such a connection is maintained.

As the dendrites of each neuron receive an array of stimulation (light, sound, smell, etc), these signals are combined both spatially and temporally. Since one impulse is rarely enough to result in an action potential, spatial and temporal summation, which are the factors that determine the depolarization or hyperpolarization at the axon hillock, combine to either excite or inhibit the post-synaptic, or “perceiving” neuron.

At the synaptic cleft, the space formed between sending and receiving neurons there is a series of important events that determine the firing of each neuron in a pathway.

At the synapse a neurotransmitter, such as acetylcholine, the example in figure 3, binds to an ion 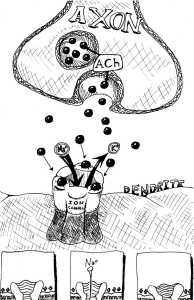 channel, causing it to open. This allows the entrance of extracellular sodium ions, which carry a positive charge, and an influx of these ions at many synapses on one post- synaptic cell increases the charge within the cell until a threshold is reached at the hillock. This threshold is called an action potential, which is the charge necessary to depolarize the membrane, and if it is reached the charge is sent along the post-synaptic axon, which is heavily insulated by myelin sheaths.

Even with this insulation, a fair amount of charge is lost, and the cell would return to a resting state if sodium were not replenished at intervals, known as nodes of Ranvier. In this way, the positive charge is carried to the end of the axon, where it results in the release of neurotransmitter to the next cell in the pathway, and the chain continues.

So that’s a neuron. Times that by twenty billion and you’ve got a brain. And what to do with that: that’s the big question.