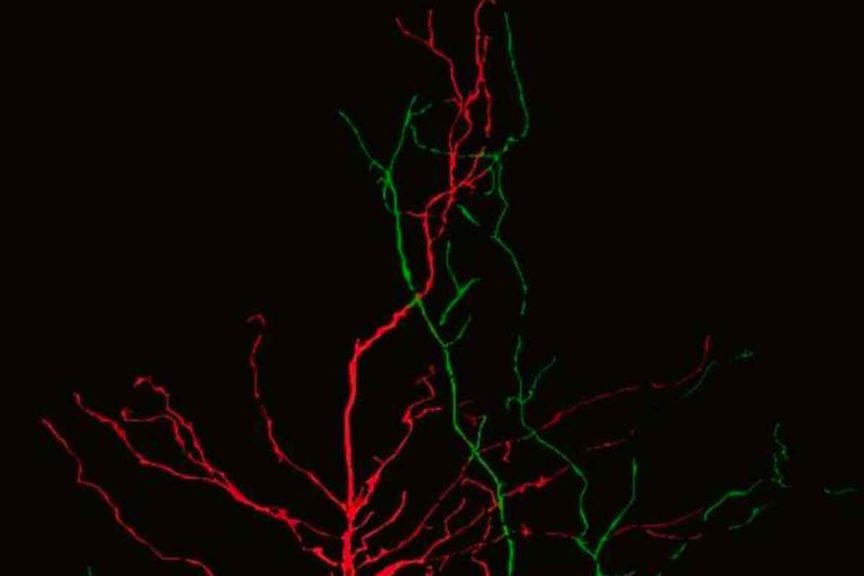 Neuroscientists have discovered brain circuitry for encoding positive and negative learned associations in mice. After finding that two circuits showed opposite activity following fear and reward learning, the researchers proved that this divergent activity causes either avoidance or reward-driven behaviors. Funded by the National Institutes of Health, they used cutting-edge optical-genetic tools to pinpoint these mechanisms critical to survival, which are also implicated in mental illness.

“This study exemplifies the power of new molecular tools that can push and pull on the same circuit to see what drives behavior,” explained Thomas R. Insel, M.D., director of NIH’s National Institute of Mental Health (NIMH). “Improved understanding of how such emotional memory works holds promise for solving mysteries of brain circuit disorders in which these mechanisms are disrupted.”

, Praneeth Namburi and Anna Beyeler, Ph.D., of the Massachusetts Institute of Technology (MIT), Cambridge, and colleagues, report their findings April 29, 2015 in the journal Nature.

Prior to the new study, scientists suspected involvement of the circuits ultimately implicated, but were stumped by a seeming paradox. A crossroads of convergent circuits in an emotion hub deep in the brain, thebasolateral amygdala, seem to be involved in both fear and reward learning, but how one brain region could orchestrate such opposing behaviors – approach and avoidance – remained an enigma. How might signals find the appropriate path to follow at this fork in the road?

To find out, Tye and colleagues explored whether two suspect circuit projections from the crossroads might hold clues. One projects to a reward center, thenucleus accumbens, and the other to a nearby fear center, thecentromedial amygdala, the output station of the emotion hub.

Each circuit projection is composed of separate populations of intertwined neurons. The researchers first used telltale fluorescent bead tracers to sort out which neurons belonged to each circuit. They then measured an indicator of connectivity — the strength of neural connections — in the projections, after mice underwent fear or reward learning. Animals were trained to either fear a tone paired with a shock or to associate the tone with a sugar reward.

These converging mechanisms in anatomically intertwined circuits could hold clues to teasing apart how positive and negative emotional associations may influence each other, Tye suggested.

Finally, the researchers pinpointed defining electrophysiological, anatomic and genetic features of the two circuits that help to explain the opposite connectivity responses.

“Given that many mental health problems, including anxiety, addiction, and depression, may arise from perturbations in emotional processing, these findings could help to pave the way to a circuit-based approach to treating mental illness,” said Tye.

The mission of the NIMH is to transform the understanding and treatment of mental illnesses through basic and clinical research, paving the way for prevention, recovery and cure. For more information, visit the http://www.nimh.nih.gov.

The National Institute of Diabetes and Digestive and Kidney Diseases, part of the NIH, conducts and supports basic and clinical research and research training on some of the most common, severe, and disabling conditions affecting Americans. NIDDK’s research interests include diabetes and other endocrine and metabolic diseases; digestive diseases, nutrition, and obesity; and kidney, urologic and hematologic diseases. For more information on CKD, visit the NIDDK’s National Kidney Disease Education Program website at http://www.nkdep.nih.gov.

About the National Institutes of Health (NIH): NIH, the nation’s medical research agency, includes 27 Institutes and Centers and is a component of the U.S. Department of Health and Human Services. NIH is the primary federal agency conducting and supporting basic, clinical, and translational medical research, and is investigating the causes, treatments, and cures for both common and rare diseases. For more information about NIH and its programs, visit www.nih.gov.